On The Other Side of Your First Retreat 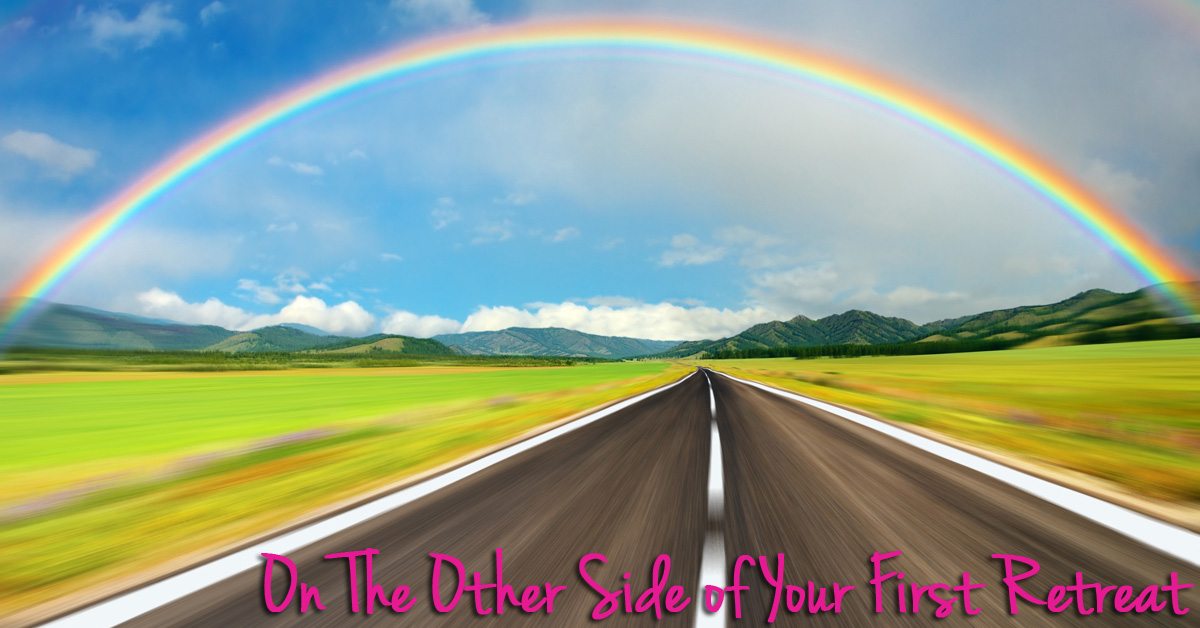 Sue is so nervous! She can’t believe the day has come! She’s checked into her suite at the host hotel for her first retreat. She’s thrilled she learned to ask for a complimentary suite upgrade – she could DEFINITELY get used to this life!

She sets herself up a little office in her suite and settles in to meditate.

She reflects on the past three months leading up to this moment. The weeks when she grappled with her commitment to this retreat. She noticed that when she doubted her decision to do this, she could quickly spiral into self-doubt and everything got sticky.

Each time she doubted she knew she had to look within. To ask herself what had triggered the doubt, and to clear the misalignment that was nothing more than a representation of her ego mind attempting to take her off course. It was all well-meaning of course. Her ego, after all, was programmed early on to keep her safe. And being naked and vulnerable in front of a room of people who had shown up for her to be their guide, well that had felt anything but safe!

Each of these bumps in the road in the weeks leading up to the retreat was an opportunity to heal. (Thank goodness she was aware enough to see this as it happened! Thank you Retreat and Grow RICH!)

She’d healed the fear of being abandoned if she was ‘too much’ that she’d created when her father left.

She’d healed the tendency to take responsibility for others that she’d created when she‘d decided that she was the only one who was going to make things happen in her household growing up.

She’d stopped holding back what she really believed to make others feel comfortable, and she created a marketing campaign that deeply resonated with the people in her life and on her email list.

And now here she was.

The group was smaller than she’d like. She wanted 10 people, but tomorrow she would be leading six brave souls on a journey of transformation, empowerment, joy and love! She’d be creating a sacred space for them to ‘go there,’ telling the Truth to themselves, and publicly, maybe for the first time ever.

She could feel the responsibility of that commitment. Yet through the healing she’d done to get there, she also felt the lightness and the joy, and she knew this was the energy from which the healing would take place for her people.

As she reviewed her intentions for the retreat, she energetically tuned in to each of the six women who were checking in to the venue that evening as well. She began to feel into and envision the changes that were in store for them, and the impact they would then make in the world. She felt as if her heart would burst from excitement… and they hadn’t even started yet.

I’m curious, do you relate to Sue? Could you see yourself right there in that moment, about to host your first retreat?

I’ve worked with many clients who were a lot like Sue, with many different types of results, from hosting 1-person retreats, to oversold retreats with a high six-figure revenue result, and everything in between.

Regardless of the result, there is something these first time retreat leaders have in common.

It’s who they become on the other side of their retreat.

See if we could fast forward three days in Sue’s life, we would see that, even though she was very empowered going into her retreat, on the other side she embodies a whole new energy.

She’s been vulnerable and powerful and loving and challenging in front of the room, and lived to see the other side. She is forever changed. Her ego has loosened its grip on some of the patterns it thought it needed to keep her alive and safe, and they will never be able to return in the same way again.

She’s tested her ideas and concepts out on a group of committed participants. Because they paid to be there, and committed their time and energy to the outcome, her ideas worked more beautifully than she could have imagined. Once she saw them in action, she became emboldened in her leadership and commitment to her work.

She’s had so much fun that she can’t wait to do it again! She now gets, in her bones, that she can do work that is fun and easy for her, and still make a powerful difference. She doesn’t have to struggle for months behind her laptop to create content, and she doesn’t have to fill her schedule with countless 1-on-1 calls to truly support people in their transformation. It will actually work to serve them in groups!

She’s also armed with a whole new understanding of her STAR Clients and what they are experiencing in life, both before and after the transformation of working with her. She’s blown away by the commonalities they all held, and now knows the exact language to use to connect with them in her marketing!

Sue on the other side of her retreat is the same Sue. Yet everything is different.

Each of my clients will affirm their own similar transformation by making the commitment, walking through the fear, and taking the action.

What about you? Are you ready to commit to transformational power of your own life-changing retreat? I’d encourage you to consider saying yes! Please share your thoughts below.

***
If you want to say yes but you’re not sure you trust yourself to move through the fear, there is nothing like journeying with a group of like-minded souls. Our group starts August 7th. CLICK HERE.