Your Spiritual Side is Showing: How to integrate spirituality in business – Part I 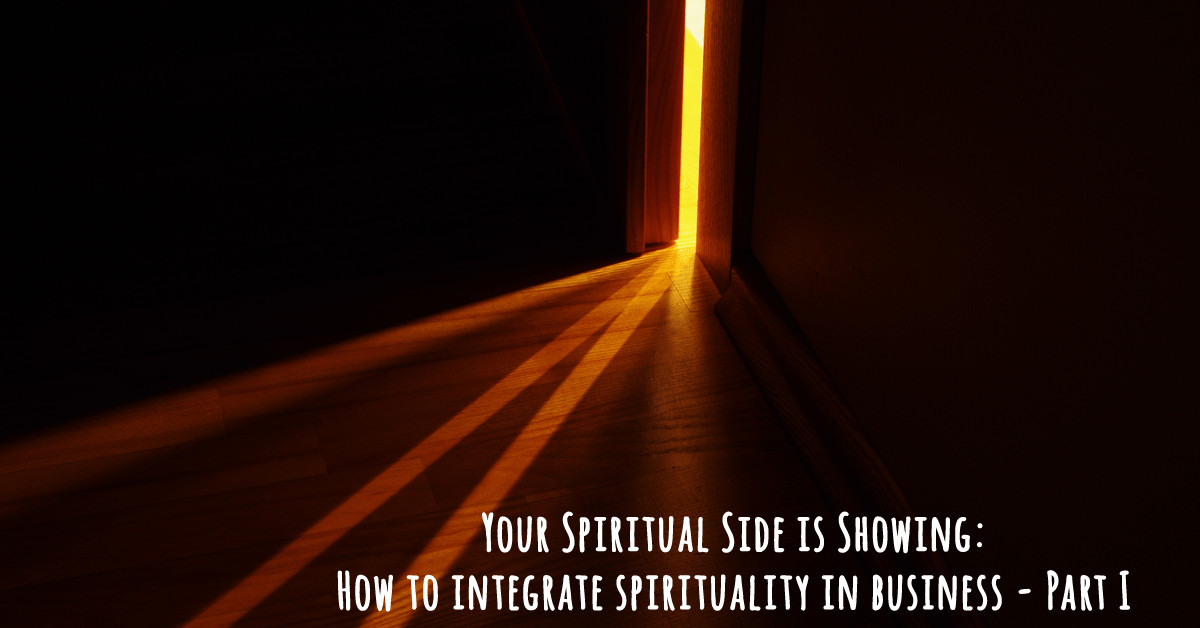 I remember like it was yesterday my work with Judi. She was a former Catholic who considered herself agnostic at best, bordering on atheist.

I was almost two years into leaving my corporate job in favor of creating a coaching business.

With a couple of certifications and some practical experience in coaching, my perspective in my business was really clear. I had a firm belief in the following statement: “Who you are BEING is more important than what you are DOING.”

Even though I was relatively new at running a business, this belief was so clear for me, that I was able to coach people from all different walks of life who were running into limits in what they were creating, because their “beingness” wasn’t lining up with what they were saying and doing. And because of this they were seriously out of flow with the ‘Universe.’

By the time I met Judi I’d had success with people transforming their experience in life through following the principles of the Universe and aligning their being (energy, vibration, belief) with their action. I knew it worked, and I was a huge stand for people experiencing this in their own lives.

Yet, spiritually, I was still a bit in the dark.

For me, personally, I had thoroughly evaluated the religious constructs I’d been taught. Many of them felt good and right and helpful, yet the way I’d experienced them myself growing up, and the way I had seen leaders in the church model them, did not feel good for me. There were pieces that just didn’t fit so I had stepped away from church.

Yet I still had a sense that some of the pieces were right and true.

In the box on dating apps (wayyy back before swiping left and right) I checked the box “Spiritual but not religious,” and that felt about right for me.  Yet, I knew Spirit was working in my life, it was the only way I could explain the miracles I’d manifested, but I didn’t quite know how. And I was still so much more comfortable with the “Universe” than “God” or even “Spirit.”

The “Universe” felt scientific. And as an engineer I’d studied Quantum Mechanics so I could wrap my mind around it that way. Even though at 21 years old taking that course I didn’t totally get it, what I’d learned about the location and direction of an object being influenced by the observer was enough to have me feel like what I was experiencing could be explained by science. This allowed me to open my mind up to the potential of something more Spiritual happening.

At the time I worked with Judi, I had proven to myself that the “Universe” was real and supportive of whatever we energetically aligned ourselves with. I’d developed an understanding that the Universe was friendly, and wanted all good things for us, often more than we actually wanted them for ourselves. I could interpret less than ideal results through a lens of us as humans actually WANTING less than ideal results, thus aligning with what we were receiving. And I knew for myself (and many clients) that the difference between manifesting what we wanted and not was total faith in ourselves in partnership with the Universe.

Judi was raised Catholic and had experienced all sorts of unpleasantries growing up in Catholic school. She’d written off all things religious as unhelpful and irrelevant. Along with that she’d written off spirituality as well.

Even though I wasn’t using the word God at that time, I used faith and Universe so regularly it was a challenge for Judi. She knew she’d been drawn to me for a reason, but she also wasn’t sure that this line of thinking was relevant for her.

We did some work to heal the experiences she’d had in Catholic school. (The Universe lined up the perfect experiences to help bring this to light!) We took a higher view of what had happened and helped her to empower herself around the situation. This released a lot of stored energy that was creating resistance within her. She felt free and ready to create.

While she was still a bit hesitant, she had gotten to a place from which she could view the Universe as friendly and ready to assist her. She glimpsed a new Truth. She could see that by expecting things to unfold in ways that hurt her, she’d been actually experiencing more of that, and she was open to expecting something different.

Judi set some big and audacious goals that week – like contracting clients and earning money. Her prior history would have told her this wasn’t possible. But her new found “faith” (used loosely at this point) suggested that perhaps it was.

In the coming weeks the “miracles” unfolded in rapid succession, leading her to surpass her goals in completely unpredictable ways.

I remember the way I felt when Judi reported to me on one of our coaching calls that she was actually believing that there was a greater force at work supporting her growth. She was so excited to share with me about her new found faith.

This conversation was a turning point for me in my own understanding of my faith, and of my work in the world.

The feeling of knowing that another human being had discovered and accepted a spiritual perspective of who they were in the world brought me so much joy, because I knew that this would change everything.

By knowing this, I began to know this myself at a deeper level. I had to own that I did in fact have a Spiritual perspective in my work and that this was important to me. I was still OK speaking in terms of The Universe rather than God, and I began to think of myself, in terms of my “brand,” as someone who played the role of opening people up who had been shut down to spirit because of religious experiences that didn’t work for them in the past.

Having Spirituality be a part of the work became non-negotiable at this point. I no longer wished to work with people who weren’t open to the idea of Spirit working in their lives. It was OK if they were skeptical or uncertain, as Judi was, but I wasn’t going to hide what I’d come to believe if someone didn’t align with it.

This is different than we’re taught in coaching school. The purest form of coaching doesn’t incorporate the coach’s beliefs into the equation. I was evolving and I had to accept that I was moving my business in a more specific direction.

I was definitely Spiritual… but on the surface you still wouldn’t know it!

Stay tuned for Part II of this series “Your Spiritual Side is Showing” where I share what happened next.